August 23, 2007 By Darren Pywell Comments are Off Support, Technotes

FusionDebug uses the source tab in the Configuration dialog to find any source code it needs. By default, this tab contains all projects in the workspace, and is configured to stop looking for source code when it finds a matching file.

If you have the same filename in two or more projects, FusionDebug will pick the first one it finds – which may not be correct.

This behaviour is easy to change.

By default, the source lookup path contains all workspace projects. You can change how the lookup path works by adding or removing projects from the path, or changing the order in which the path is searched.

We can solve this by checking the box marked Search for duplicate source files on the path. Now, when FusionDebug tries to find the file, it asks us which one is correct, by popping up the following dialog: 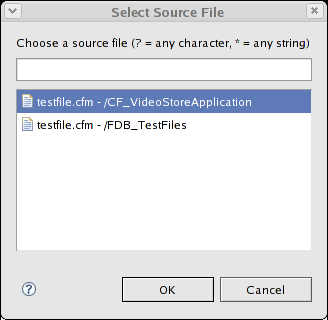 This is a good solution, but being asked every time can be a bit time-consuming. Instead, we can edit the source lookup path to include just the project we need. The source path is specific to each configuration, so if we were debugging another project, we could simply add a new configuration, and set up the source path for that project too. More information on creating configurations can be found in the User Manual.

Now whenever the breakpoint fires in testfile.cfm, FusionDebug opens the correct one without asking – that from the FDB_TestFiles project.

Conclusions and Further Exercises For The Reader

We’ve created a custom source lookup path for our configuration. This ensures that FusionDebug is able to find the correct source file whenever a breakpoint fires. It’s particularly important to do this since many projects share common files, not the least of which is application.cfm.

Some development organisations may also have common libraries of CFCs or pages which they re-use. It would be a simple matter to create an Eclipse project for these common libraries, and then to include it in the source lookup path too.

Careful ordering of path elements (using the up and down buttons) can help FusionDebug quickly locate the right file without having to turn on Search for duplicate source files on the path.